Cádiz is an ancient port city lying on Spain’s southwest coast. Surrounded by the Atlantic Ocean, this city lies on a narrow strip of land. This location is 130 kilometres south of Seville which is the capital of the province.  Cádiz has served as an important port for the Spanish Navy. The cruise terminal of the port here lies alongside the Alfonso XIII pier.

Among its many ancient buildings and historical landmarks are some spectacular plazas. Many of these lie in the densely populated old town. The narrow streets and lanes of the old town are a delight to explore. Be sure to visit the Plaza de San Antonio and its lovely church during your visit.

Other historical places worthy of a visit include the famous landmark of Cádiz Cathedral. Built in 1260, the cathedral boasts a variety of architectural styles. The various cathedral chapel houses some interesting relics and paintings. Further beautiful works of art are on display at the Museum of Cádiz. This museum also showcases the city’s 3,000 year history.

La Caleta Beach lies between the castles of Santa Catalina and San Sebastian in the old town. Although not the most popular tourist beach, it’d much loved by the locals. Famous carnival songs reference this beach in particular.

Heading over to the newer part of the city visitors will find the popular Victoria Beach. This beach id family friendly due to its sandy bottom and gentle waves. Victoria beach stretches for 400 metres. Alongside the beach are many shops, bars and restaurants.

When the sun sets over Cádiz the happy go lucky gaditanos (locals) come out to eat, drink and be merry. This city has no shortage of lively dining and entertainment venues. Its rich offerings of delicious seafood feature on restaurant menus. These menus also cater for many varieties of tasty tapas.

For a riot of humour, song and dance, visiting during Carnival is a spectacle you should not miss. So throw caution to the wind and join in the merriment.

Cádiz is located on the southwestern coastline of Spain in the province of Andalucia. The image below once clicked will take you to a full size Google map of the area. 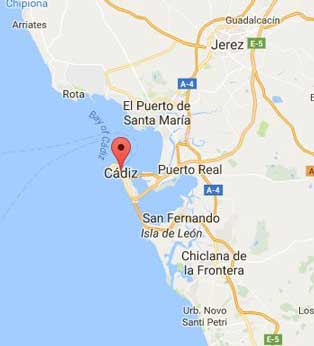