The weather in La Zenia is among the best found on the Mediterranean coastline of the Costa Blanca. This popular beach resort yields a super micro climate and some 320 days of sunshine per year.

La Zenia lies on the beautiful Orihuela Costa on the southeastern coastline of Spain. The popularity of this area has increased since the opening of Zenia Boulevard. The introduction of the Boulevard has boosted tourism and provided thousands of jobs. The golden beaches and Mediterranean Sea location are major advantages also. Add the fantastic weather in La Zenia and you have the perfect holiday destination.

September is the beginning of the autumn months. The temperature will still exceed 30 Celsius most days during this month. The start of September is like August with hot temperatures that can be as high as 40 Celsius.

October can be a unpredictable but the temperatures will still be between 20 – 25 Celsius. It’s still common to see temperatures as high as 30 Celsius on several days during the month. It’s also common to see a large increase in the amount of rainfall.

The precipitation levels in October are by far the highest of any month of the year. This is because of the weather phenomenon know as a “Gota Fria” or “Cold Drop”.

A Gota Fria only occurs on the eastern coast of Spain. The colder air from the Atlantic in the west and the Pyrenees in the north meets the warmer air on the east coast. The result of this can be devastating. It’s worth pointing out that this does not happen every year. A typical gota fria will bring high winds of up to 150 km’s per hour, heavy rain and large hail stones.

November sees the temperature decreasing with the nights becoming much colder. The homes in this part of Spain tend to favour the hotter weather to remain cool. Some form of heating will be mandatory in most cases.

The average temperature during the day will still be around 20 Celsius. This can seem much colder if your home faces the north. You can expect plenty of rainfall during this month but less than October.

The winter weather in La Zenia like much of the Costa Blanca is quite mild. The temperature rarely drops much below around 9 during the day. The colder winter months are December, January and February. There is a lot more rainfall during these months. The temperature tends to increase again around spring time. Below is a little information about the colder winter months in La Zenia.

January – January is the coldest month of the year in La Zenia. This month also sees more days of rain than any other month. The average temperature will usually be around 11 Celsius. This will seem much colder if you live in Spain all year round. The evenings will be particularly cold with a temperature of 5 – 8 Celsius.

Weather in La Zenia in March, April & May

March – March sees the temperature increasing as we enter the spring months. The average temperature during the day will be around 14 – 16 Celsius and a little warmer in the evenings. There is still quite a bit of rain around in March but not as much as the previous two months.

April sees the weather improving with average temperatures of between 16 – 20 Celsius. This month does not have as many days of rain as March, but the precipitation levels are much higher.

The evening temperature will also be increasing to around 10 – 12 Celsius. You will not be needing any form of heating during most of this month.

May is the start of the tourist season when temperatures are increasing. There is still some rain around at the beginning of the month. The temperatures will rise to 20- 25 Celsius towards the end of the month.

Although May is not a summer month, you will likely still experience a few days as high as 30 Celsius.

As one might expect, the summer weather in La Zenia is usually hot. The average temperature here often exceeds 30 Celsius. This is especially true in the summer months of June, July and August. The temperature will be in the mid to late thirties with plenty of days exceeding 40 Celsius.

The tourist season tends to begin in May and lasts until the end of September. The weather in La Zenia is particularly good during these months. Below you can read about the sort of temperature to expect during the hotter months.

June is a particularly good month for weather as we enter the summer months and the tourist high season. June is the best month for those not accustomed to hot temperatures on a regular basis. There is still a few days of rain in June but very little.

The average temperatures is between 25 – 30 Celsius for most of this month. It’s common to have at least a few days in the late thirties. A temperature that exceed 40 Celsius is not uncommon either.

July is the height of summer when temperature is hot every day. There is hardly any rainfall in July and average temperatures will be between 28 – 32 Celsius. More often than not, the temperature will be in the mid to late thirties.

July is the second hottest month in La Zenia. You can expect several days at least to be hovering around or exceeding 40 Celsius.

August is the hottest month in La Zenia like most of the Costa Blanca. The average temperature in August will be somewhere between 30 – 35 Celsius. Most days will be late thirties and as high as 40 Celsius. There is no rainfall in August and the evenings can also be as high as 30 Celsius.

A good nights sleep August will be difficult without some type of fan or air conditioning. The summer is coming to an end but the hot weather will last for a few more months at least.

Please click the image below for a full size version of the monthly averages in La Zenia. The graphic displays average temperatures, expected days of rain and other useful information. 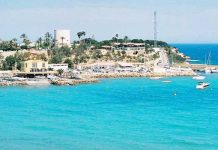 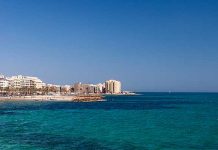