Salou is one of the top tourist towns in northeastern Spain and part of the Costa Dorada coastline. This popular town is part of the province of Tarragona in Catalonia. Salou attracts millions of visitors per year.

There has been a huge tourism drive over the past few years here. The aim is to establish Salou as the number one tourist resort in Europe.

PortAventura World and Costa Caribe alone attract around 4 million visitors per year. Here there is plenty more going on away from these theme parks. This area is rich in culture, history and natural beauty.

Top Attractions & Things to do in Salou

Salou would not be one of the top European destinations without amazing attractions. There are also many great things to do to keep you busy during your visit.

This town boasts the biggest theme park in Europe. The same company owns the water park up the road from here. All around Salou there are beautiful monuments and landmarks. These include the Illuminated Fountains and Avenida Jaume I (picture above).

With millions of visitors each year it’s necessary to have plenty of hotels and great resorts. This is something Salou does not fall short on. Below are some of the top things to do and experience when visiting this beautiful area.

With around 4 million visitors each year it’s pretty hard to get away from PortAventura. Especially when speaking of the top things to do in Salou. PortAventura is almost it’s own world within a world such is the vastness. There seems to be a limitless amount of attractions and services on offer.

In fact, PortAventura is 6 separate worlds. These consist of Mediterranea, Polynesia, China, Mexico, Sesamo and the Far West. Here you will have the opportunity of staying a one of the many 4 and 5 star hotels as part of your holiday.

Each world has it’s own hotels that blend into that particular culture and lifestyle. El Paso for example is a Mexican themed hotel that’s characteristics match the real El Paso in Mexico.

Here there are also many fine dining restaurants dotted around the resort. Many shops, sports facilities and 3 different golf courses. You can check out everything by visiting the website for more details in the meantime.

The Illuminated Fountain in Salou is the top landmark in this town. The fountain alone attracts plenty of visitors to the area. Opened in 1973, the illuminated fountain is formed of over 100 different jets of water. These explode into hundreds of different colour combinations. The beautiful colours are synchronized with music also.

During Easter and summer, visitors are treated to spectacular water and light shows. These shows will leave you amazed.

The fountain is such as success that it’s now available at several other fountains. These fountains can include Avenida Jaume and surrounding areas.

The weather in Salou is what you may expect for northeastern Spain. With warm summers and mild to chilly winters.

The temperature during the hotter months of June, July, August and is around 25 Celsius. The Sea temperature will reach 25 Celsius towards the end of summer also.

The hottest months are July and August but June and September can also be hot. Much hotter than the average temperature suggests. The colder months are December, January and February.
The temperature will drop to 9 Celsius and even colder at the beginning of the year.

The most rainfall tends to arrive in September, October and November. There is a surprising amount of rainfall in May also as the temperatures begin to increase. The Sea temperature during the colder months reaches a chilly 13 Celsius. You will not need a bathing suit if visiting during this time.

The image below once clicked will take you to a full size Google map of Salou. 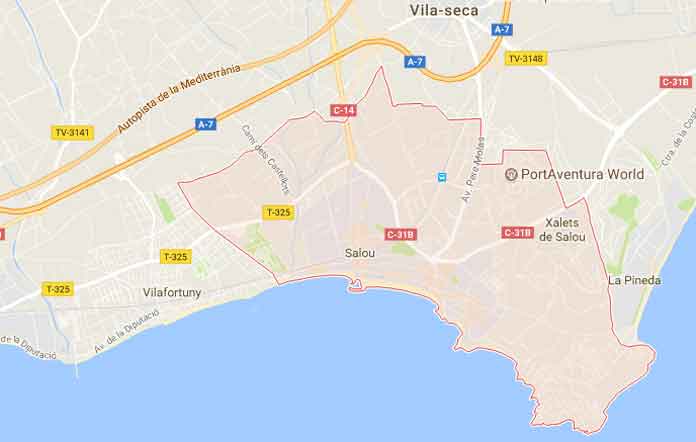 Salou has 14 km of beautiful sandy beaches and coves along it’s coastal areas. Many of these beaches hold Blue Flag Certification. Below are some of our favourite beaches you should check out when visiting. 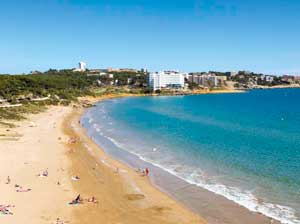 Llarga beach is one of the longest and busiest beaches in Salou. This beach does get busy but there is plenty of room for everyone. This beach has a length of around 600 metres of golden sand and clear shallow waters ideal for children. Llarga like all beaches in this area is always clean with a friendly beach bar and great atmosphere. 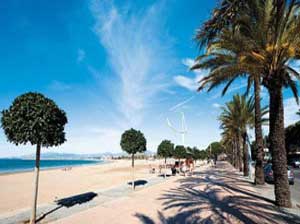 Llevant Beach is another top beach located in the centre of town. This is the longest of the beaches in Salou with a length of 1200 metres and an average width of 70 metres. The golden sand here is beautiful and as a result, this beach is always busy.

There are excellent facilities which include showers and toilets and good disabled access. The water here is particularly calm making this beach ideal for people of all ages. 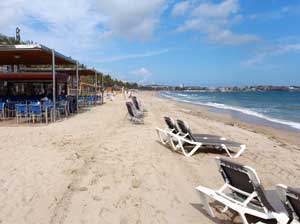 Ponent Beach is shorter than Llevant with a total length of 1100 metres. The average width of this beach is 30 metres of fine golden sand. The Miramar promenade runs alongside Ponent which is always a buzz of activity. Ponent, like the other 2 beaches above has excellent facilities and disabled access. This beach tends to be occupied by the locals more than the tourist.

Below are a few examples of some of the top hotels in Salou. 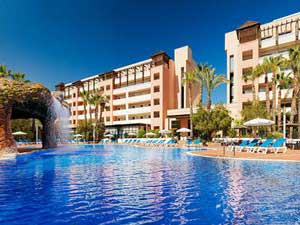 One of the very best hotels in Salou and indeed Spain. Salauris Palace Hotel boasts 351 elegant rooms. This hotel is only 800 metres from PortAventura. Facilities here include A swimming pool with waterfalls, jacuzzi and hydraulic chair lift.

The restaurant and bar areas have recently undergone extensive re-developments. their website explains in more detail. Other unique facilities include beauty centres and a children’s playground with pool. There is also underground parking available. 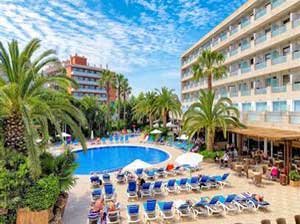 Another magnificent hotel from H10 group comes in the form of the H10 Vintage. This hotel has 323 rooms to suit all requirements. H10 Vintage is a 4 star hotel with some excellent facilities. Especially the new bicycle stations.

Cycling is popular here so it’s great to see more facilities like this available. The bar and restaurant areas serve a good range of Spanish and international cuisine. More features include beauty rooms, children’s playground and pool.