This article provides information about the best holiday resorts in Tenerife. We also provide information about the types of facilities each resort provides. Some tourist locations are quite commercialised with late night entertainment. Others are more suited to those looking for a relaxing holiday.

Which Are The Best Resorts in Tenerife?

Many of the top resorts in Tenerife are lie on the south and west coastline. Santa Cruz is one of the exceptions as is the ever popular Puerto de la Cruz city and province. Playa de las Americas, Los Cristianos, and Costa Adeje are well grouped together. on the southwestern coast of the island. Los Gigantes, Playa de la Arena and Puerto de Santiago are all located to the north. There are also several other popular tourist resorts in the northern regions.

Playa de las Américas or Las Américas is the party capital of Tenerife which lies on the southern coast. During the day this resort is active with sun lovers soaking up the warm sun on the beautiful beaches. Other will be spending their Euros in the many shops here.

Playa de las Américas boasts 6 beautiful beaches that offer a wide range of water sports and activities. Jet-skiing, scuba diving and snorkeling are popular on these beaches. Surfing and windsurfing on a breezy days.

Los Cristianos underwent major tourism redevelopment back in 2007. It’s now emerged as the second most popular resort behind Playa de las Américas. Los Cristianos lies to the south of the number one resort. This beautiful resort boasts a beautiful harbour that’s overlooked by the mountainous backdrop.

The harbour used to be busy with shipping up until the 1970’s. It’s now the location for smaller ferries and luxury yachts. Most of the action here takes place around the promenade. Here you will find plenty of cafes, bars, restaurants and discos.

The popular Costa Adeje lies a little further northwest than the previous two resorts. This resort is well known for having some of the best weather on the island. Mount Teide tends to shield this area from the colder northern winds. This helps to keep the temperature warmer. Costa Adeje is the more sophisticated than some of the other resorts. This lovely location tends to attract the rich and famous and those with plenty money to spend.

Puerto de la Cruz is another of the top resorts in Tenerife. This resort lies on the northwestern coastline. Puerto de la Cruz retains much of it’s traditional Canarian character. More so than any other island resorts.

Some of the top attractions here include Lago Martiánez, the Botanical Gardens. and the popular Loro Parque (Parrot Park). The climate is this part of Tenerife tends to be a little cooler than the southern areas. Much of the landscape here is lush green.

Los Gigantes gets it’s name from the massive Acantilados de Los Gigantes (Cliffs of the Giants). This is one of the major tourist attractions on the island of Tenerife. The image above of the cliffs comes from the rock pools. This area offers amazing panoramic views of the Atlantic Ocean. The popular resorts of Puerto de Santiago and Playa de la Arena are both lie within 3 km’s to the south.

Santa Cruz de Tenerife is the Capital City of Tenerife and joint Capital of the Canary Islands. Located in the northeast of the island, Santa Cruz is one of the most visited areas on northern Tenerife. Santa Cruz is the most populated of the island with close to 200,000 permanent inhabitants.

The beautiful City of Santa Cruz boasts some amazing architecture and museums. The Mercado Nuestra Señora de África (Market of Our Lady of Africa) lies in this City. Playa de las Teresitas is one of the top beaches in northern Tenerife. The sand at this beach comes from the Sahara Desert. 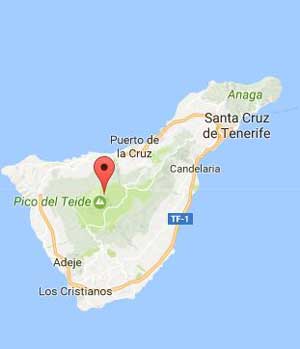 The image above is only a rough indication, this page shows the map and points of interest in Tenerife.

Below are a few more of the smaller resorts in Tenerife. 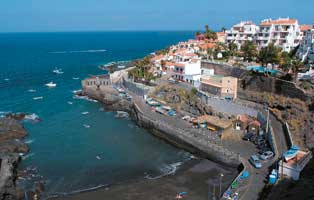 Puerto de Santiago lies on the western coastline, around 1 km south of Los Gigantes. This is a much quieter resort than most but still ideal for family holidays. There is a small black sand beach here that is never gets too busy. This resort has several more smaller beaches also. Boating is particularly popular in Puerto de Santiago. there are plenty of bars and restaurant serving up a variety of Canarian Cuisine. 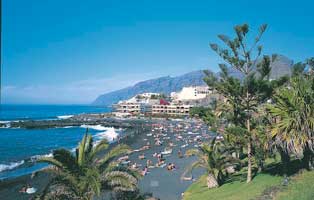 Playa de la Arena lies around 3 km’s south of Los Gigantes and less than 2 km’south of Puerto de Santiago. This area is much more tourism orientated than some resorts along the western coast. Here there are plenty of bars, restaurants and hotels. Blue Flag certification has previously be awarded to the black sand beach here. The best known hotel resorts here are Barcelo Varadero and Playa de La Arena.