The weather in Torrevieja is fantastic almost all year round. The excellent climate here yields mild winters and hot summers. Being close to the Mediterranean Sea is another benefit of this popular location.

Torrevieja is well known for having one of the healthiest micro-climates in Europe. The surrounding Salt Lakes (Las Salinas de Torrevieja) play big part in this. The Alicante mountain range also helps to maintain the healthy micro-climate here.

September is the start of autumn in Torrevieja. You can still expect temperatures well into the thirties. Towards the end of September the temperature is decreasing. There is still plenty of beach weather on offer. The average temperature for September is around 25 Celsius.

October can be unpredictable and usually delivers more rainfall than any other month. The reason why there is more rainfall in October is due to the weather phenomenon known as a “Gota Fria” or “Cold Drop”.

A Gota Fria affects most of the south eastern coast of Spain. This is when the colder western and northern air (jet streams) meet the warmer summer air. The warmer air from the eastern coast..

The result of a Gota Fria can be catastrophic with hurricane-like winds of up to 150 km per hour. The high winds are often accompanied by heavy rainfall and huge hail stones. This hail can measure anything from a golf ball to a tennis ball in size.

Despite the unpredictable weather, the average temperature in October is still 25 Celsius.

November sees the temperature dropping. The monthly average is now 15 – 16 Celsius. It’s still common to see temperatures exceed 25 Celsius and see plenty of activity on the beaches. The nights are starting to become much colder leading up to Christmas.

The colder winter months are December, January and February. The average temperature is between 11-13 Celsius. Below we provide a little information about the winter and cooler months.

December sees the end of autumn and the beginning of winter. The average temperature will now fall to around 12 Celsius. Although winter has started, the temperatures still exceeds 20 Celsius on occasion.

Many of the beaches in Torrevieja have gatherings for Christmas day. it’s not unheard of for sunbathing to occur around this time. Especially those that are from the colder northern climates such as Scandinavia.

January is the height of winter and also the coldest month in Torrevieja. Temperatures are at their lowest in this month with the average being around 11 Celsius. January also sees more days of rain than any other month. The precipitation levels are still low in comparison to other months.

February sees winter coming to an end in with average temperatures of around 13 Celsius. This month sees high humidity levels of anything up to 70%. It’s also much windier conditions than January. There are around 11 days of rainfall on average this month. The precipitation level is still low as the temperature increases. Especially towards the end of the month.

Weather in Torrevieja in in March, April & May

April sees the temperatures increasing to an average of around 18 Celsius. Although there are not as many rainy days in April, the precipitation levels are quite high. When it rains in April, it usually rains a lot. Towards the and of April the temperatures regularly exceed 20 Celsius. Be sure to have the bathing suit ready around this time.

May sees to the temperature increasing as we lead up to the summer months. Most of May sees average temperature of around 25 Celsius. You can expect several days at least in the thirties. This is especially true towards the end of the month leading into summer. It’s common to see plenty of rainfall in early May but nowhere near as much as April.

The summer weather temperature in Torrevieja is hot. This is especially true in June, July and August. The temperature in these months often exceeds 30 Celsius and can reach as high as 45 Celsius.

The temperature begins to cool in mid September and experiences a gradual drop as the year comes to an end. Below is a little information about the sort of weather to expect in each month.

June is usually hot as one may expect as we enter summer and the tourist high season. The average temperature during this month is 25 – 30 Celsius. This temperature can get much hotter towards the end of the month. It’s common to experience temperatures that exceed 35 Celsius.

July is the height of summer in Torrevieja when temperatures can reach between 30 – 35 Celsius. The monthly average is 27 Celsius but this will be much hotter most days. You can expect the temperature to be closer to 40 Celsius towards the end of July.

August is without doubt the hottest month in Torrevieja and the height of the tourist season. Temperatures often exceed 30 Celsius and usually rise into the late thirties. Torrevieja often sees the temperature rise above 40 Celsius. Make sure you are well equipped with plenty of sun cream and drinking water.

The image below once the words are translated says Torrevieja tops 25 Celsius on the 2nd of March which should give people an idea of how much good weather in Torrevieja is on offer. 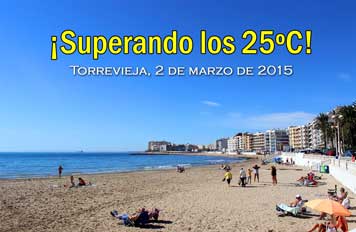 The graphic below can be clicked to become much larger, this shows average temperatures, daily hours of sunshine, average rainfall and some more information about the Torrevieja weather. 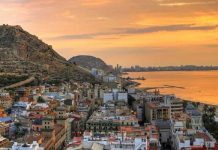 Weather in Alicante, Temperature and Climate