Welcome to the Spanish Costas and islands website. We are a leading resource that provides useful travel tips and guides all about Spain. The main focus of this website is the coastal areas and islands of this beautiful country.

If you would like skip our introduction, please use the quick links below to navigate to the area that interests you.

The Spanish coastline contains many diverse Costas. Each coastal area has their own incredible things to experience and enjoy. The Costa del Sol for example is the best known for tapas whilst the Costa Blanca is famous for it’s white beaches.

The Top 10 Costas of Spain & Resorts

Below we have compiled a list of the main Spanish Costas for tourism and popularity. You can access full individual pages about each coastal area by clicking on the orange text links. We also feature some of the most popular costas at the bottom of this page.

Below is an image that highlights most of the main coastal areas of Spain with both major island groupings. There are many more smaller areas to consider but our focus is on the main tourism locations. 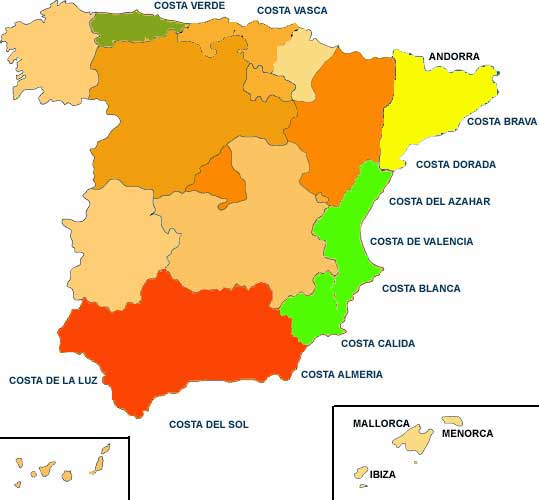 In Spanish
Visit our Spanish site Costas de España for all the same content in the Spanish language.

During the summer the Spanish mainland is always the warmest place to visit. This is certainly the case for the southeast and southwest areas. July and August see temperatures that approach 45 Celsius which may be too hot for some.

The Canaries boast the hottest weather in winter and spring as most of Europe freezes. The sub-tropical climate makes these islands the top destination for a winter break.

The Costa Blanca is one of the leading holiday destination in Spain. Known as the White Coast in English, this is a reference to the 200 km’s of white sand beaches here. This costa belongs to the province of Alicante which makes up part of the eastern coastline.

The Costa Blanca begins at Denia in the north and extends to Pilar de la Horadada in the south. There are many tourist resorts and cities that lie along this strip of coastline. The most famous city is Benidorm which lies to the north. To the south is Torrevieja and the ever popular Orihuela Costa.

The Costa del Sol is another of the leading Spanish Costas. The literal translation of this costa is “Sun Coast”. This popular tourism haven makes up 150 km’s of the southern Spanish coastline. Málaga is both the province and capital city of this part of Spain.

This Spanish coastline stretches from Estepona in the west to Nerja in the east. Málaga and Marbella are the two major cities here with the former also being the capital. The top tourist towns here include Torremolinos, Benalmádena, Fuengirola and Mijas. This area is popular for it’s golden sand beaches and nightlife.

Below is a quick reference list of the top costas in Spain with their meaning in both English and Spanish.

Spain’s Costas in The Northeast

The Costa Brava stretches 60 km’s from the town of Blanes to the French border. This Spanish Costa was one of the first to undergo mass tourism re-development in the 1950’s. This part of northeastern Spain belongs to the province of Girona.

The literal translation for this coastal area is the “Rugged Coast”. The top tourist destination here is Lloret de Mar which is famous for it’s amazing beaches. The pretty town of Tossa de Mar lies to the north of Lloret. The medieval castle in Tossa and Sa Palomera Rock in Blanes (picture above) are must see attractions.

The Costa Dorada coastline is one of the longest of the Spanish Costas. This area makes up 215 km’s of northeastern Spain. Consisting of 20 tourist towns, this area stretches from Cunit in the north to Alcanar in the south.

The literal translation for the Costa Dorada is “Golden Coast”. This is a reference to the golden colour of the sand when the sun reflects off the beaches here. The town of Salou is the top holiday destination here. Salou is home to PortAventura and 30 stunning beaches. Close to 5 million visitors spend their holiday here each year.

Contrary to popular belief, all the islands of Spain help to form the Spanish Costas. The translation of “Costa” is “Coast” which all 11 major islands have or they would not classify as such. Below are the names of the two major archipelagos.

The Costa Cálida stretches for over 250 km’s of the southeastern coastline. This Spanish Costa boasts over 150 beaches. The translation for this area is “warm coast”. This is testament to the hot arid climate here.

The Costa Cálida belongs to the province of Murcia. This area extends from El Mojón in the north to Águilas in the south. Murcia and the naval city of Cartagena are the major cities here. The top tourism resorts here include La Manga del Mar Menor, Mazarrón and Los Alcázares.

The Costa del Azahar stretches for 115 km’s of the eastern coast of Spain. Vinaròs is the most northern point of this Costa, Almenara is the most southern. The “Orange Blossom Coast” once translated to English is part of the province of Castellón. This is one of the quieter Spanish Costas.

The top tourist towns on the Costa del Azahar include Benicarló and Peñíscola. Work began on Peñiscola Castle in 1294 and was finally completed in 1307. Another important town along this coastline is Benicàssim. The seaside town of Benicàssim hosts the FIB (Festival Internacional de Benicàssim). FIB is one of the biggest music festivals in Europe.

The Costa de la Luz is one of the few Atlantic facing coastal areas of spain. This coastal area extends from Tarifa in the south to the River Guadiana. The Rio Guadiana defines much of the Portugal – Spain border. This area is the top location for windsurfing on the Spanish mainland.

The Costa del la Luz (Coast of Light) exists in the provinces of Cádiz and Huelva. Both of those provinces belong to the region of Andalucia in southern Spain. The town of Tarifa and the city of Cádiz are two popular locations here. From this area you can take the 40 minute ferry to Tangier in Morocco. The port of Tangier lies on the Strait of Gibraltar. The gateway of Africa and Europe.

The Costa Tropical is one of the lesser known of the Spanish coastlines. This lush green area of southern Spain lies next to the Costa del Sol. Covering a land mass 400 square miles, this coastal area is part of the province of Granada. The Costa Tropical (Tropical Coast) also extends to Andalucia which is the biggest region of Spain forming most of the southern mainland.

The backdrop of this beautiful part of Spain is the Sierra Nevada Mountain range. Water runoff from the rain and melting snow feeds the fertile land down below. Almuñecar is the top tourist location in this area. Motril is not as popular but is still the largest town on this coastline.

Moving to the Costa Almería which is one of the most unspoiled areas of Spain. This area lies on the southeastern coastline and stretches for 200 km’s. The most northern point is Pulpí with the most southern being Adra. Much of the coastal area evolves around the important shipping and ferry port.

Completing our 10 Spanish Costas we come to the Costa Verde. This area accounts for much of the northern coast of Spain. The Costa Verde (Green Coast) passes through the regions of Cantabria and Galicia. The coastal area is also part of the province of Asturias. This is the longest coastline at 345 km’s.