Welcome to our guide about the hottest Canary Island in the winter and spring. We feature the months of December, January, February, March, April, May and October. These months are the most popular for those wishing to enjoy some winter and spring sunshine.

Below most months you will see links to pages specific to that island and month. Be sure to check those pages out which provide a lot more detail. You can also use our quick links below to quickly navigate to the hottest month which interests you.

Which Is The Hottest Canary Island?

The Canary Islands are one of the top holiday destinations in Europe during the colder months thanks to the super climate here. The temperature rarely drops below 17 Celsius in winter and spring. You can expect warm temperatures whenever you visit these beautiful volcanic islands. Some of the best beaches in Spain are spread across the 7 islands.

There are 7 main islands that form the Canaries and some smaller islets. Some 1350 miles away are 4 other Spanish Islands which lie in the Mediterranean Sea. The focus of this guide is to look at the the hottest Canary Island that attracts the most tourism during the busier months.

January is one of the most popular months for tourism in the Canary Islands. There are plenty of warm temperatures still on offer wherever you go. Many choose to flock here to spend Christmas and the New Years festivities away from the colder climes up north.

January is the coldest month but the temperature is unlikely to drop much below 17 Celsius. There is still plenty of rainfall around but a significant decrease from December.

The hottest average temperature is 18 Celsius for both Fuerteventura and Gran Canaria. Tenerife and Lanzarote both drop to 17 Celsius.

Warmest in January – Gran Canaria
There is little to choose between Gran Canaria and Fuerteventura. Both have the same outside and sea temperature. There is a touch more rainfall in Gran Canaria but not much more.

Our preference is for Gran Canaria. The popular resorts of Maspalomas and Playa del Inglés will likely be much busier at the beginning of the year.

January
Below you will find the temperatures for each island in January.

Which Of The Canary Islands Has The Warmest Weather In February?

The warmest Canary Island in February is another 3-way tie as the temperatures remain on the cooler side. Gran Canaria, Fuerteventura and Lanzarote all reach 18 Celsius which is the mean daytime temperature now across the islands.

Tenerife remains at 17 Celsius during this month but is still the place to be in February. The Sea temperature is also very similar across all the islands with an average of 18 Celsius.

Tenerife tends to see more rainfall in February. More than the other islands with Fuerteventura receiving the least rain.

Warmest Of The Canaries In February – Fuerteventura
Preference for February is Fuerteventura despite there being little between the other islands. There is less rainfall in February than anywhere else.

This beautiful island is also approaching the windy season. Fuerteventura is popular for windsurfing and other board activities. The warm air coming from the Sahara Desert is enough to get our vote.

How About The Hottest Canary Island in March?

March is the start of spring when the temperature is beginning to increase. This month is like February in many ways. Tenerife tends to get plenty of rain as the other islands are seeing a significant decrease.

Warmest Canary Island in March – Gran Canaria
The vote goes to Gran Canaria for March due to the fact that the Sea temperature is warmer than Lanzarote. The levels of rainfall and the outdoor temperature are identical between the two. Both will be warm whichever you decide to visit.

Best Canary Island For Families.
Gran Canaria is one of the best islands for families to spend their holiday. This is especially true of resorts such as Puerto Rico de Gran Canaria which is one of the top places for family fun. In all honesty, there is little to choose between this island and Tenerife when it comes to a great holiday.

Warmest Of The Canaries During April?

April is another popular month for the main Canary Islands with spring yielding a further increase in the temperature. Tenerife and Gran Canaria will now warm to an average temperature of 19 Celsius. The eastern islands of Lanzarote and Fuerteventura are warmer still with a daily average of 21 Celsius. The Sea temperature across the islands will now be 20 Celsius.

Warmest Canary Island in April – Lanzarote
The eastern islands are the place to head during this month as the average temperature is warmer. The island of Lanzarote during April tends to see more hours of sunshine with a high of 24 Celsius. There is also less rainfall here than the other islands.

Best Canary Island For Beaches.
Lanzarote has some of the best beaches in the Canaries along with Fuerteventura. The latter is much windier so bathers may prefer the former

Weather in April Articles
Below are the individual weather pages for each island in April.

May Sees Some of The Warmest Weather Across The Canary Islands

May is like April in many respects with another small increase in the temperature. Most of the islands should now be enjoying an average temperature of at least 20 Celsius. The Sea temperature should also improve to 20 Celsius. During May, the amount of rainfall will begin to decrease as the summer months approach. The hours of sunshine will now rise to 10 hours per day.

Best Canary Island For Hotels and Restaurants.
Many of the top hotels and restaurants are in Tenerife. This includes many Michelin restaurants that you do not find elsewhere.

Gran Canaria May
Lanzarote in May
Fuerteventura May

Warmest Of The Canaries in September?

September is one of the hottest times to visit the Canaries. This month tends to be as hot as August, even warmer in some places. It’s this time of year when the sea temperature is also at it’s warmest. Tourism to these beautiful islands tends to go up again after the hotter summer months.

The summer sees more families coming to spend their holidays in the Canaries. September is still summer but the end of this month will see the arrival of autumn.

The hottest places to visit in the Canaries in September are the islands closest to Africa. Both Lanzarote and Fuerteventura see warmer temperatures on average.

Warmest Island in September – Lanzarote
Both Lanzarote and Fuerteventura have an average temperature of 25 Celsius in September. The high for Lanzarote is a touch hotter at 29 Celsius. Although there is little rain now, Lanzarote sees less when rainfall does arrive. In 2019, Lanzarote also saw hotter temperatures on average.

October is a favourite time for many to take an autumn holiday to the Canary Islands. Conditions across the Canaries are still pretty good and tourism is increasing again.

There is little to choose between the four main islands with all seeing an average temperature of 23 Celsius. The eastern islands of Lanzarote and Fuerteventura see less rainfall in October. Gran Canaria and Tenerife will see more rain but the sea is quite a bit warmer. Wherever you decide to go will see at least 2 – 3 rainy days during this month. The daily high may be a touch higher at times to the east but not by much.

November along with previous month October are two of the top months to visit the Canaries. This is because you have the guarantee of good weather here, unlike northern Europe. Although the weather remains warm, this month sees a big drop in temperature. 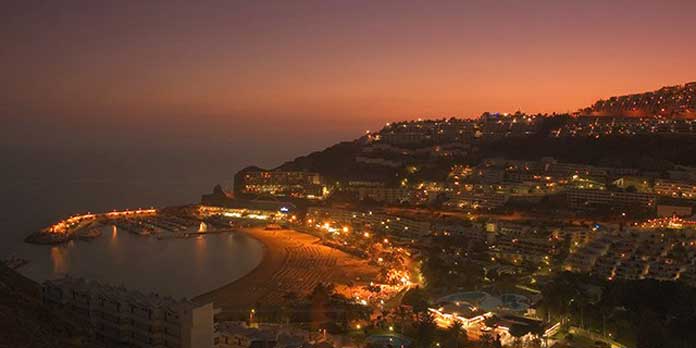 The outside temperature across the Canaries falls a few degrees from that of October. November also sees a significant increase in rainy days and the amount of rainfall. The temperature of the sea also continues to drop.

Warmest Canary Island in November – Gran Canaria
The average temperature of the main islands is now 21 Celsius. Fuerteventura and Lanzarote see the least rainfall but the sea is colder. The vote goes to Gran Canaria for November as it sees around half the rain of Tenerife. The sea temperature is also warmer here at 22 Celsius.

December is a great time to pay the Canaries a visit to escape the colder weather further north. Christmas and New Year tends to attract plenty of tourism for exactly this reason.

Below we provide details about the sort of weather to expect during December. This includes averages temperatures, expected rainfall and hours of sun. We also touch on conditions for each of the main islands for tourism. These include Tenerife, Gran Canaria, Lanzarote and Fuerteventura.

The hottest Canary Island in December is close between Fuerteventura and Lanzarote. Both islands close to the African mainland enjoy warmer weather during this month. Gran Canaria can be as warm but usually sees around double the rainfall . The only thing separating the two islands is the sea temperature and amount of rain that arrives.

An average daily temperature in Fuerteventura during December is a warm 19 Celsius. The high temperature can reach 23 Celsius some days but can drop as far as 14 Celsius. The sea temperature is usually 20 Celsius which is plenty warm enough to enjoy a swim. You can check this excellent resource for more information about the sea temperature here in December. Fuerteventura tends to see only 3 days of rain in December with low precipitation levels. The amount of rain here is the lowest of the four main islands during December.

Best Canary Island For Windsurfing.
Fuerteventura boasts some amazing beaches but many come here for the windy conditions. This is where the surfers and windsurfers head.

The coolest of the four main islands is Tenerife in December by some distance. The average daily temperature during this month is 17 Celsius. The high temperature now is 20 Celsius with a low of 14 Celsius which is on the chilly side. Like the other islands, Tenerife sees 6 hours of sunshine each day.

Tenerife also sees quite a bit more rainfall than any of the other three islands. December usually sees around 7 days of rain with high precipitation levels. The advantage here as it is with Gran Canaria is that the sea is a warm 21 Celsius. This is usually the case at the start of the month with the sea cooling around Christmas time.